Past branch presidents  hosted a holiday social at Westminster Manor’s fifth floor solarium from 3:00 to 5:00 p.m. on Sunday, December 14. The social featured a surprise guest author, Babette Hughes, a fascinating 90+ old author and former model who has written 3 novels.

Her stories are set in the 1930’s, and are loosely based on Babette’s father, who was a gangster/bootlegger, who died in a violent turf war when Babette was very young.

Her story is inspirational to women of all ages. Babette was the National Director of Women’s Political Action for Hubert Humphrey in 1972, she is a breast cancer survivor, she is founder and President of Discover Yourself, Inc, and she walks two miles a day at 92-years old.

As she states in the Author’s Note of The Red Scarf:
“I have tried, in my writing, to understand and celebrate the gloriously complicated lives of women for my own and my readers’ discovery. To me, this is the supreme function of all writing. It is no easy calling, but its rewards go so far beyond the mundane that I hope to practice it for as many years as I have left on earth.”

Pictures from the Holiday Social: 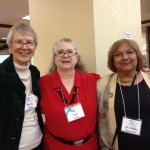 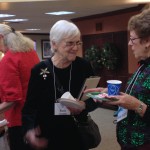 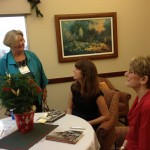 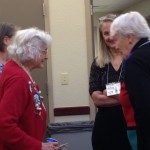